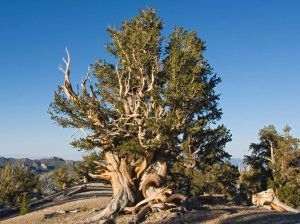 The oldest living thing on earth is a bristlecone pine located in the White Mountains of California, USA. When discovered and tested in 2013, it was determined to be 5,064 years old. When it sprouted in 3051 BC, the Aegean Bronze Age had just begun, Egyptians were developing Hieroglyphic writing, and China was developing the potter’s wheel.

Prior to the discovery of this tree, the title of World’s Oldest Tree was held by another bristlecone pine, also in the White Mountains of California. When tested in 1957, this tree, known as Methuselah, showed an estimated germination date of 2880 BC, making it 4,846 years old.