When Wallace and Gromit Met a Time Lord 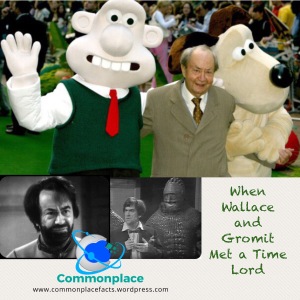 Peter Sallis appears with Wallace and Gromit (top), and as Eric Penley (bottom left). Patrick Troughton is the Doctor, with an Ice Warrior (bottom right).

Whovians tip their hat to Sallis as having a featured role in the 1967 Doctor Who story arc “The Ice Warriors.” As scientist Eric Penley, Sallis met the Doctor (Patrick Troughton) when the Martian warrior race the Ice Warriors first debuted.

Sadly, and ironically, Peter Sallis passed away a mere 8 days before the airing of “The Empress of Mars,” the most recent appearance of the Ice Warriors on Doctor Who. ﻿