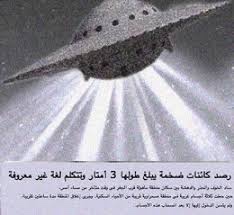 Readers of the Jordanian newspaper Al-Ghad were startled to read the reports of an alien encounter close to the town of Jafr. According to the news reports, the desert community witnessed the landing of UFOs, piloted by creatures 3 meters (10 feet) in height.

The reports went on to describe the bizarre alien language from these gigantic humanoid creatures. Their voices, which the newspaper referred to as “squawking” were indecipherable to the terrified earthlings who witnessed the first contact.

Even more frightening than the appearance or sound of the creatures was the effect of their technology. All electronics in the region were knocked out, even as the intense heat from the UFOs scorched the nearby ground.

Al-Ghad recounted how many terrified residents of Jafr fled into the desert to escape the alien invasion.  Much to everyone’s relief, after one hour and forty minutes, the mysterious alien visitors reboarded their spaceships and departed, without ever making their intentions known. All that remains of this close encounter are the scorch marks on the desert floor and horrifying memories to haunt the nightmares of the befuddled community.

All of this was reported as news. The only clue that it might not have really happened was in the date at the top of the paper: April 1, 2010. For those who noted the date, it might not have generated the skepticism it would have caused English readers. Al Ghad‘s readers were unaccustomed to seeing April Fool’s Day hoaxes in its pages, and many found the experience less than hilarious.

With their own version of the panic from the 1938 radio show “The War of the Worlds,” Jafr had to deal with the fallout from those who believed the story. Many residents, believing the story, huddled behind locked doors, fearing the worst. School absences skyrocketed as parents kept their children home from classes. The mayor of Jafr even considered the mandatory evacuation of the 13,000 residents but elected against it, fearing that people would be injured in the chaos.

Read about more hoaxes and pranks.