The Medicine Worked Fine… Until the Patient’s Jaw Fell Off

Feeling rundown? Suffering from headaches? How about anemia? Diabetes? Asthma? Whatever it is that is making you feel under the weather, Radithor may be just what you need. What’s that you say? You’ve never heard of Radithor? Read on to learn about this product that will cause your jaw to drop in amazement. Possibly, it will also drop off as a side effect of the miracle drug. 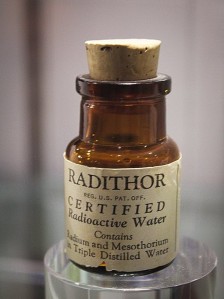 Radithor was on the market from 1918 to 1931. It was invented by William J. A. Bailey. He advertised Radithor as “A Cure for the Living Dead” and as “Perpetual Sunshine.” A few doses of Radithor was guaranteed to cure everything from diabetes to impotence. Radithor had a special ingredient that distinguished itself from other medications of the day: radium.

Bailey stood behind his claim of the authenticity of the product, offering $1,000 to anyone who could prove Radithor contained less than the stated amount of radium. No one ever collected on the offer.

Although the contents of Radithor were indisputable, its curative properties did not live up to the promises.

A noted consumer of Radithor was Eben Byers. Byers first gained prominence as U.S. amateur golf champion. His fame spread into the business world where he advanced to become president of the A.M. Byers Company in Pittsburg, one of the world’s largest steel companies. After receiving an injury to his arm, his physician recommended he try Radithor to speed up his recovery.

Byers started the Radithor treatment in December 1927. For the next two years, he averages three bottles a day. He immediately began noticing a difference. He told everyone who would listen that Radithor was the best thing that ever happened to him. He said he felt more energy. He noticed improved muscle tone. It was so good that he even gave it to his racehorses. He gave cases of the medicine to business associates. Beginning in December of 1927, Byers averaged three bottles a day over the following two years. Feeling invigorated and toned up, at least in the beginning, he extolled Radithor from the rooftops. He fed it to his racehorses. He gave cases of it to his business colleagues.

For two years, he extolled Radithor’s virtues. He continued to take it and promote it until 1930 when he noticed some unsettling side effects: his teeth started falling out. Before long, it wasn’t just his teeth that were feeling the effect. An investigator from the Federal Trade Commission looked into Byers’ situation and reported, “His whole upper jaw, excepting two front teeth, and most of his lower jaw had been removed. All the remaining bone tissue of his body was slowly disintegrating, and holes were actually forming in his skull.” The investigator added, “A more gruesome experience … would be hard to imagine.” 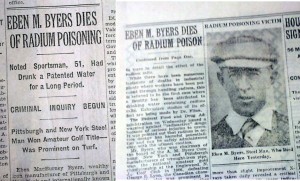 Byers’ died in 1932. He was buried in a lead-lined coffin. When his body was exhumed in 1965 for study, his remains still emitted dangerous amounts of radiation.

The publicity surrounding his death lead to legislation giving the Food and Drug Administration greater authority to deal with quack medicine. The Federal Trade Commission issued an order against Bailey’s business to “cease and desist from various representations theretofore made by them as to the therapeutic value of Radithor and from representing that the product Radithor is harmless.” Even so, many people continued to take the product well into the 1930s. Radithor made Bailey a wealthy man. Over 400,000 bottles were sold before it was pulled off the market.

Undeterred by the setback with Radithor, Bailey went on to found the “Radium Institute” in New York, where he designed and marketed various radiation-related products. Among the items he sold were a radioactive belt-clip, a radioactive paperweight, and a mechanism which purported to make water radioactive.