How the BBC Show “Today” Ensures There Will Be a Tomorrow 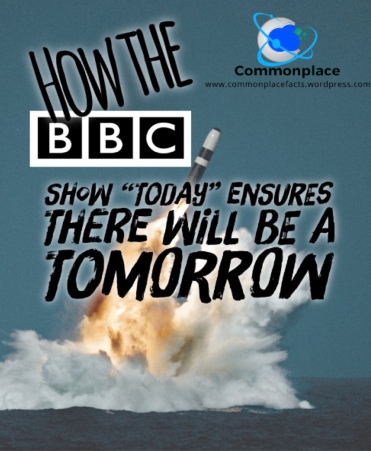 Four Vanguard-class submarines lurk beneath the surface, protecting the territory of the United Kingdom. Each of these submarines are equipped with Trident nuclear missiles. Each of the crews is prepared to launch these missiles, ready to do their bit for Queen and country and to contribute to the end of the world.

With such an incredible responsibility on their shoulders, it is reasonable to assume there are strict protocols in place to dictate when the missiles should be released. It might surprise you that part of those protocols involve listening to BBC radio.

One of the measures used by the Royal Navy to determine whether there is still a United Kingdom in existence is to tune in to BBC Radio’s program Today. Today has been on the air every morning since it debuted in 1958. It is such a high-profile program that only something as significant as the end of the world would be likely to interrupt its regular programming schedule.

On August 12, 2004, the country’s nuclear submarine commanders wondered if that was what they were experiencing when fifteen minutes of unexpected radio silence triggered an alert. Fortunately, the protocols require three days of silence before the end of the world is to be presumed.

The doomsday protocols involve opening the sealed letter from the prime minister that contains his or her final instructions to the submarine’s commander. The letter, known as the “Letter of Last Resort” is written by each prime minister upon entering office. The orders are secret and spell out what the commanders are to do with the nuclear arsenal in the event of being cut off from communication with the chain of command.

The letter is locked inside a safe inside another safe, and placed in the control rooms of the submarines. The safes can only be opened by the submarine’s commander and deputy.

The instructions in the “Letter of Last Resort” may not necessarily include launching the missiles. In theory, the orders could be anything, but Matthew Seligman, Professor of Naval History at Brunel University, said there are “only so many options available: Do nothing, launch a retaliatory strike, offer yourself to an ally like the USA, or use your own judgment.”

Hopefully, one of the things included in the letter is the prime minister’s helpful instructions to replace the battery in the radio, just to make sure that the BBC is really and truly off the air.