Churchill’s Bequest for a Marmalade Cat

When Winston Churchill donated his home to the United Kingdom’s National Trust, he did so with the request that there always be a marmalade cat named Jock, with a white bib and four white feet, in comfortable residence at the estate.

The National Trust has always honored this request. The current feline to benefit from this arrangement is Jock VII. He was rescued from an animal shelter and took up residence in May 2020, when he was six months old. 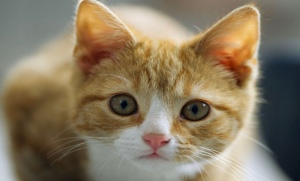 Churchill’s property, known as Chartwell, consists of a mansion on 80 acres of beautiful countryside. Jock VII spends his days following the gardeners around, trying to figure out what they are doing and begging for snacks. When sufficiently worn out from this activity, he takes plenty of naps on a sofa he has claimed as his own.

Jock was rescued along with 30 other cats from squalid conditions. Despite a difficult start in life, Jock now lives as one of the most pampered felines in the United Kingdom. 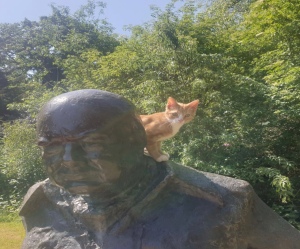 Jock, atop a statue of his benefactor, Winston Churchill.

The benefits of being designated as a Chartwell cat can extend well into retirement. The previous occupant of the office, Jock VI, retired from duty in 2020 because of a degenerative eye condition that rendered him almost completely blind. Jock’s caretakers decided that life in Chartwell would not be suitable for him, so he was relocated to a smaller, peaceful garden where he can live out the rest of his days in the loving care of Chartwell’s House and Collections Manager.