When the Lincolns Turned Down an Invitation to a Party 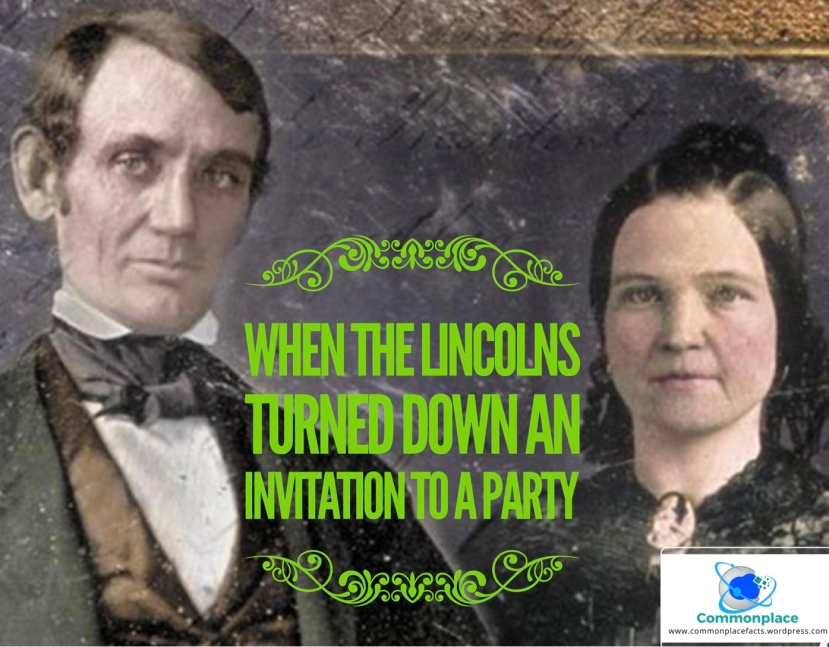 Abraham and Mary Todd Lincoln received many invitations to parties during their lives. They also had to decline many an invitation. When they declined the invitation to one particular party, however, they were both filled with deep and genuine regret.

One of the reasons they really wanted to go was because the invitation came from a good friend. James Reed was a fellow resident of Springfield, Illinois. This Irish entrepreneur had enlisted Abraham’s legal skills to get started in the business world. During the Black Hawk War, Reed and Lincoln served together. Throughout their association, their friendship grew stronger and stronger. James and his wife, Margret, socialized regularly with the Lincolns. When they asked the Lincolns to their party, it just seemed certain they would eagerly accept.

When the Lincolns sent their regrets, they gave their reasons, but the explanation seemed a little lame. Mary was pregnant, they explained, and they had a toddler son at home. The party might be too much for her. The explanation about her family situation was, indeed, true. Even so, Mary had graced many a party in Springfield society during both pregnancies. Why did she feel this party would be too much for her?

And then there was Abraham’s excuse. He had just been elected to the U.S. House of Representatives, and he felt he needed to devote himself to those new responsibilities. Again, that was a true statement, but everyone knows that politicians thrive on mingling with the people. Lincoln was elected to office, in part, by attending lots of parties. Why would he say no to this invitation — particularly from such good friends.

Whatever the true reasons for declining the invitation, history simply accepts the fact that the Lincolns were not a part of the Reed party. History does not record whether they ever had second thoughts about their decision, even after it became one of the biggest parties ever. It was such a big deal, in fact, that you could even say it was historic.

Saying the party was historic is more than literary embellishment. There are several reasons that history remembers this party. One of the biggest reasons was the menu. That, alone, would be worth documenting. When the newspapers later reported the culinary experiences of the party, one can only picture Abraham and Mary Todd, imagining themselves at that memorable setting.

A further reason for the significance of the party was the decision to combine it was another. The Reeds had, after all, recently fallen on hard times. Combining their party with that of another would ease the financial burdens and increase the likelihood of success. It is because of that decision to combine parties that you probably don’t remember much about the Reed Party in 1846. History tends to remember it by the name of the party with which the Reeds joined.

There is one other reason why the Lincolns said no to the invitation. If the party were held in Springfield, they undoubtedly would have found a way to join their friends. The fact that the Reeds and their party were going out of town made it somewhat more understandable for the Lincolns to stay home.

That is why, on April 15, 1846, Mary Todd Lincoln was waving goodbye to her friends as they left Springfield for California — a place Abraham always wanted to see and where Mary had family connections. The Reed Party would now be known by a different name because of the men who headed up the gathering which which they had joined. Their names were George and Jacob Donner.

The Donner Party would join with other groups and individuals during their journey westward. They also had some leave for one reason or another. By the time they got to the Sierra Mountains, there were 83 people in the party. Only 45 of them would survive to arrive in California. It was during those horrendous winter months in the Donner Pass that the food earned the party its historic place. At least 21 of those who died ended up on the menu as survivors kept themselves alive through cannibalism.

Historic marker in Springfield, Illinois, noting the point of departure for the Donner-Reed Party.

As it turned out, Abraham Lincoln’s name was destined to be forever remembered. History records his courage, leadership, vision, and determination. The name of Abraham Lincoln is also clothed in tragedy. One way or the other, it seems that history was determined to have Abraham Lincoln’s life end horribly. Imagine just how much more horribly it could have ended if the Lincolns had simply said yes when they were invited to a party.