How Long Did It Take to Invent the Can Opener? 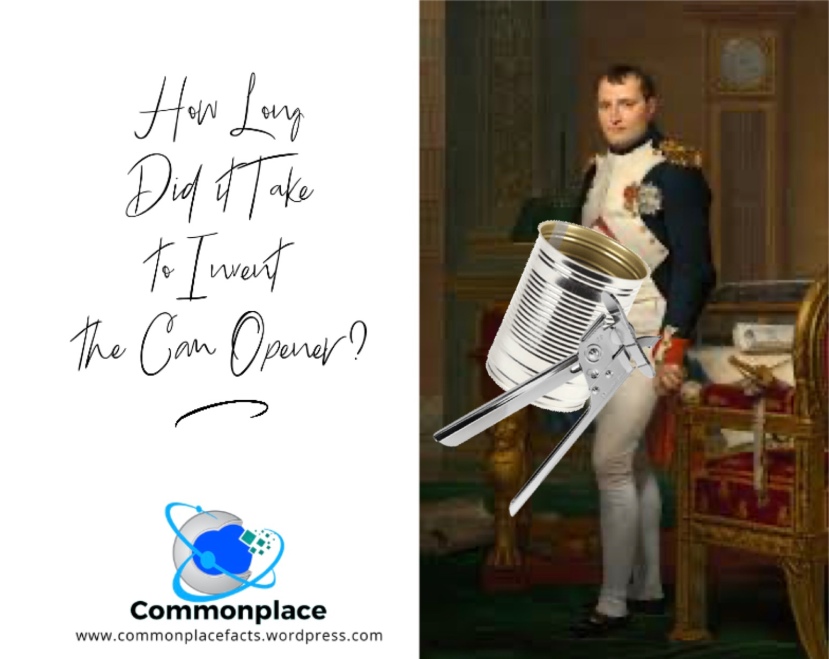 War has been a blight on humanity for all of history, but it occasionally produces some good things. Such was the case when Napoleon’s problems with providing food to his troops led to the invention of canned food. How this happened, and how long it took for the can opener to come along afterward, is the subject of today’s exploration of fun and fascinating facts.

It was 1795, and Napoleon Bonaparte had a problem. The supply lines to his troops on the front line were long and fragile. Trying to send perishable food to his soldiers was increasingly difficult. Napoleon (or possibly Frederick the Great) said, “An army marches on its stomach.” Knowing just how much the success of his military endeavors pivoted on solving this problem, Napoleon came up with a contest to see what the best minds of French minds could devise. He offered a 12,000 franc reward for anyone who could figure out how to adequately supply the French troops. His requirement was that the solution must allow sufficient food to make it to the troops and remain unspoiled.

It took 15 years, but in 1810, Nicholas Appert stepped forward with an innovation that not only won the prize, but it started a series of innovations that would transform the way the world would eat. Appert discovered that sealing food in a glass jar and heating it would preserve the food from spoliation. He didn’t know it, but what he had stumbled upon was a process for using heat to kill off the harmful bacteria and preventing replacements from touching the food by completely sealing the jar’s contents.

Appert’s innovation won him the prize from Napoleon, but it was when combined with a British invention that it went to the next level. The same year Appert made his discovery, Peter Durand received a patent for the world’s first can made of iron and tin. Combining Durand’s invention with Appert’s innovation resulted in canned food. Preserving food in a can not only offered the protection from spoliation but since cans are more durable than glass jars, the usefulness grew exponentially.

Napoleon was finally able to send plenty of food to his troops. Unfortunately, getting into a sealed can is not quite as easy as twisting the lid off a glass jar. With no uniform way of opening the cans, the hungry men resorted to brute force. The most common method was to use a hammer and chisel. While this got the job done, it was not the best way of keeping the food in pristine condition.

Another problem with the cans was the complexity of making them. A skilled laborer could produce about half a dozen per hour. The material of the cans themselves was significantly thicker than the ones we are used to, making them even more difficult to open. Consequently, it was more than half a century after Napoleon’s contest before canned food’s use outside of military circles became more than an occasional novelty.

The innovation that made canned food more accessible happened in 1846. Henry Evans created a method of producing a can from a single motion. This allowed can production to rise to 60 per hour. One year later, Allen Taylor improved upon Evans’ method and patented a stamping method for can production. These innovations allowed for thinner, cheaper, and more accessible cans for preserved food.

How long, then, would you assume it took for anyone to begin to consider an easy solution to retrieving the food from the sealed container? Canned food continued to grow in popularity, with cooks pounding away with hammers and chisels or using saws and blunt knives to open them.

This continued until 1858 — almost half a century after the invention of canned food. Ezra Warner received a patent that year for the first dedicated can opener. His design became known as a “bayonet and sickle” type can opener. It worked by puncturing the can with the bayonet portion. The sickle portion removed the lid. It left very rough edges on the can, but it did the job.

Twelve years after Warner’s invention, J. Osterhoudt patented the design that has become associated with sardine cans. His 1869 innovation made use of a little key that the user could insert, twist, and peel off a partially-perforated lid.

Think you know whether the match or the lighter was invented first? Click here and find out.

It wasn’t until 1870, however, when the device we commonly recognize today as the can opener came into existence. William Lyman’s original design made use of a simple wheel that rolled around the edge of the can, cutting it as it went. The Star Can Company added serrated edges to the wheel, improving the process. The result was the manual version of what can be found in almost every kitchen in the world.

In answer to the question asked early on, it was sixty years from the invention of canned food to the invention of the modern can opener. That’s a lot of years of getting to your dinner with a hammer and chisel!