After Escaping Cannibals, Dealing With Politicians Was Easy 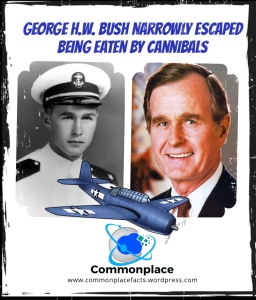 In September 1944 nine US airmen were shot down over Chichi Jima, a small island 700 miles south of Tokyo, Japan. Of these nine men, only one evaded capture by the Japanese. That man, Lt. George H.W. Bush, went on to become the 41st President is the United States.

What he didn’t know — and wouldn’t discover until more than half a century later — was how narrowly he avoided the most horrifying of fates. When James Bradley conducted research for his book Flyboys, he uncovered the shocking fate of Bush’s colleagues. The details had remained sealed to spare the families unnecessary trauma, but Bradley was able to obtain access to the files and disclose what happened.

Marve Mershon, a radio operator, was marched to a freshly dug grave, blindfolded, and made to kneel for beheading by sword. A witness to the event testified a Japanese soldier, named, “When the flyer was struck, he did not cry out, but made a slight groan.”

The next day a Japanese officer, Major Sueo Matoba, decided to include the slain American’s flesh in a banquet for his fellow officers. A Japanese medical orderly who helped the surgeon prepare the ingredients said, “Dr. Teraki cut open the chest and took out the liver. I removed a piece of flesh from the flyer’s thigh, weighing about six pounds and measuring four inches wide, about a foot long.”

Another crewman, Floyd Hall, met a similar fate. Admiral Kinizo Mori, the senior naval officer on Chichi Jima, told the court that Major Matoba brought “a delicacy” to a party at his quarters – a specially prepared dish of Floyd Hall’s liver.

According to Mori, Matoba told him, “I had it pierced with bamboo sticks and cooked with soy sauce and vegetables.” They ate it in “very small pieces,” believing it “good medicine for the stomach.”

Translator Jimmy Dye became the third victim of cannibalism. He had been a prisoner for several weeks when Captaim Shizuo Yoshii ordered his liver to be served at a party for fellow officers. Parts of a fourth airman, Warren Earl Vaughn, were also eaten.

The remaining four airmen were executed, one by being clubbed to death.

Those identified as knowingly participating in cannibalism were ultimately tried as war criminals, convicted, and executed.

As for President Bush, he learned of the fates of his colleagues some sixty years after their deaths.

He was spared a similar fate only because he ditched his plane further from the island than the other crews, and managed to scramble on to a life raft. He was eventually rescued by a US submarine, the USS Finback.

When the black hull of the USS Finback surfaced in front of him, Bush thought he was hallucinating. He had been vomiting, bleeding from a head wound, and weeping with fear. His words upon rescue were simply, “Happy to be aboard.”

The future president received the Distinguished Flying Cross for his conduct in those fateful days.

He recalled that while on the submarine he asked himself why he had survived. “Why had I been spared, and what did God have in store for me? In my own view there’s got to be some kind of destiny, and I was being spared for something on Earth.”

Reflecting on his deceased comrades, he said, “I think about those guys all the time.”

Click here to see the video of George Bush’s rescue by the USS Finback.