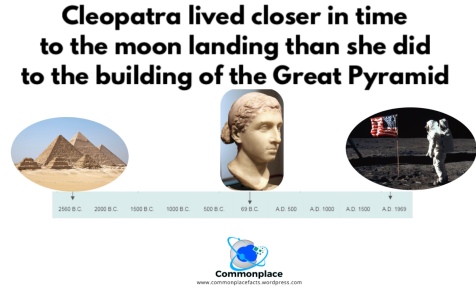 When you look at the building of the Great Pyramid of Giza, the life of Cleopatra, and Neil Armstrong’s first steps on the moon, which of those is the most out of place? At first glance, it would be easy to assume that the two examples from ancient Egypt belong together, having occurred at roughly the same time. If that is your guess,  you would be wrong.

The Great Pyramid of Giza was constructed over a 20-year period and was completed around 2560 BC.

Cleopatra VII, the last active ruler of the Ptolemaic Kingdom of Egypt, was born in the year 69 BC, 2,491 years after the completion of the Great Pyramid.

In other words, Cleopatra lived closer in time to the Space Age than she did to the time of the Great Pyramid.