Feasting on the Buttered Toast Phenomenon 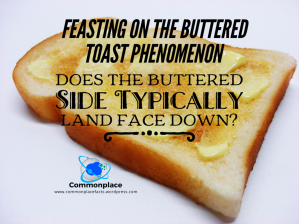 Drop a piece of buttered toast on the kitchen floor, and we all know what is going to happen. It will land buttered-side down, of course. At least, that’s what we expect, but is that merely the assumption of Murphy’s Law? Thanks to exhaustive research, we now know whether the Buttered Toast Phenomenon is reality or imagination.

The observation that buttered toast is most likely to land face down is aptly named the Buttered Toast Phenomenon. Some people chalk it up to a gloomy view of life, but others swear by it, claiming there is a scientific basis to expect to have to clean your floor after such an accident.

The origins of the theory behind the Buttered Toast Phenomenon are unknown, but the principle goes back at least to the mid-19th century. In 1884, James Payn wrote:

I never had a slice of bread,
Particularly large and wide,
That did not fall upon the floor,
And always on the buttered side!

The laws of probability dictate that the number of incidents of the buttered side down should be roughly equal to the alternative. Even allowing for the extra weight on the buttered side, it should be more or less a 50/50 scenario. If you throw a piece of buttered toast in the air as if you were doing a coin toss, this proves to be true. There is another side of this that needs to be considered, however.

A 1995 study on this subject by Robert Matthews, “Tumbling toast, Murphy’s Law and the fundamental constants,” took an in-depth look at the physics to see if the Buttered Toast Phenomenon is more than simply an old wives’ tale. His research revealed some surprising results.

Unlike the coin toss analogy, buttered toast rarely falls from a random height or as a result of being spun at random speeds. The typical scenario sees the toast slipping off the edge of a kitchen counter or a dining room table. Countertops and tables tend to be between two and six feet (0.7 to 1.83 meters) high. As the toast falls off the edge, it begins to spin. From the countertop/table height, there is enough time for the toast to rotate about one-half of a turn. Since it typically starts out butter-side-up, this one-half rotation brings it in contact with the floor buttered-side-down.

Contrary to what you might expect, the added weight of the butter makes no difference in the results. The butter’s mass (approximately 4 grams) is small compared to the mass of the typical slice of toast (approximately 35 grams). Butter tends to be spread uniformly over the surface and it immediately begins soaking into the bread toward its center. Butter, therefore, makes a negligible contribution toward the rotational dynamics of the falling toast.

Matthews’ study suggests solutions for those who do not like to get dirt and pet hair stuck in the toast’s butter. The first, of course, is to be more careful and not let your toast fall to start with. Secondly, once the toast is buttered, you can turn it over and leave it butter-side-down, thus ensuring that if it does fall, it will land butter-side-up. A third alternative is to adjust the height of your tables and countertops to 10 feet (3 meters). This will allow the spinning toast to rotate a full 360 degrees before hitting the floor. The final option is to make sure that the toast leaves the countertop at a horizontal speed of 3.6 miles/hour (1.6 meters/second); this will prevent sufficient rotation to bring the buttered side in contact with the floor.

For his efforts and contribution to the well-being and body of knowledge of the human race, Matthews was awarded the 1996 Ig Nobel Prize for physics.

Presumably, someone proposed a toast at the reception.