Court Rules that Marvel Mutants Are Not Human 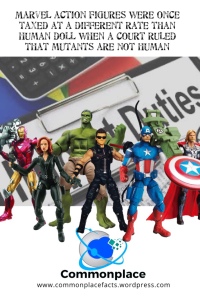 Mutants are not human and are not worth as much as humans. So was the ruling of the United States Court for International Trade, not in the Marvel Universe where mutants have to fight for equality and basic human rights, but in the real world case of Toy Biz, Inc. v. United States.

The Harmonized Tariff Schedule established two different levels of import duties for toys, depending on whether the item was of a human figure or a non-human figure. The difference was more than terminology; the tax rate for human figures is 12%, but it is only 6.8% for non-human figures. Marvel Comics subsidiary Toy Biz maintained that their action figures should fall in the “nonhuman” category and qualify for the lower tariff.

“They are more than (or different than) humans. These fabulous characters use their extraordinary and unnatural physical and psychic powers on the side of either good or evil. The figures’ shapes and features, as well as their costumes and accessories, are designed to communicate such powers. For example, “Storm” (a tall and thin figure with white mane-like hair and dark skin) in assortment 4900 K has a lightening [sic] bolt as an accessory, reflecting the character’s power to summon storms at will. “Rictor” in assortment 4950 E which has a human appearance but comes with a built-in wheel in the back which when turned makes the figure vibrate and thus is designed to simulate Rictor’s “power to generate earthquake-like vibrations.” “Pyro” in assortment 4950 E has a costume that, with two long hoses attached to it, is designed to aid the character’s “mutant ability to control and shape flames.”

The court ruled in favor of Toy Biz, Inc., thus cutting the tariff rate for their action figures nearly in half.The victory was short-lived. The Harmonized Tariff Schedule was thereafter amended, removing the distinction between the two types of toys. In the Marvel Universe, mutants continue to struggle for equality, but as far as the Tax Code is concerned, equality has been achieved already.