The King Who Thought He Was Made of Glass 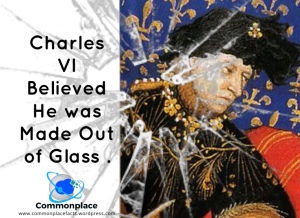 There is no shortage of leaders who have wondered if they might break under the pressure of their responsibilities. King Charles VI of France (1368-1422) wasn’t being rhetorical when expressing this concern, since he believed his bones were made out of glass.

When he was 24 years old, Charles endured an illness that brought fever and seizures. From that point, until his death thirty years later, he experienced prolonged periods of insanity. These episodes, which could last months at a time, manifested themselves with memory loss to the point where he could not remember his wife and children, that he was king, or even his name. He also believed he was made out of glass and was so fragile that he would shatter if anyone or anything touched him.

To combat his highly-breakable state, the king had clothes made with iron rods built into the material.

Without question, the monarch was barking mad — literally. When he wasn’t overcome with fear of shattering into a million pieces, he would frequently roam the castle, howling and barking like a wolf.

The Queen, Isabeau of Bavaria, was so put off by her husband’s bizarre antics that she recruited someone to take her place. The woman, Odette de Champdivers, looked so much like the Queen that Charles couldn’t tell the women apart, even during those periods when he was in his right mind. This allowed Isabeau the luxury of putting some distance between herself and her loony husband, whenever his behavior became more than she could handle.

Read about the Civil War general who believed he was a bird.

Read about the military leader who believed he had been impregnated with an elephant.