Just when you thought it was safe to step outside and relax in the blissful tranquility of nature, it’s time to meet a real-life combination of Bambi and Dracula: the vampire deer. 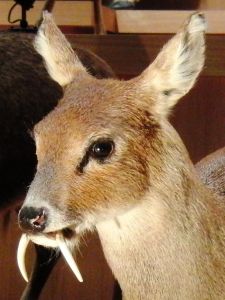 While officially known as the Chinese water deer, this seemingly-impossible combination of cuteness and horror is commonly called the vampire deer because of its most recognizable characteristic. If seen from behind, this otherwise-adorable creature might easily be mistaken for a miniature version of a white-tailed deer. When viewed from the front, however, the water deer can show off its impressive set of vampire teeth.

The deer’s scientific name, Hydropotes inermis, comes from the Latin words that describe it as a defenseless creature that can be found near water. British biologist Robert Swinhoe gave the deer the “defenseless” designation because of its lack of antlers. The name is somewhat deceiving, however. Instead of antlers, the water deer grows two large tusks, appearing as overgrown canine teeth. Growing to a length as much as 8 cm (3.2 in), the tusks can be used as weapons or folded back, roughly parallel with the upper jaw, so they do not impede the deer’s ability to graze.

The water deer is native to China and parts of Korea. It was introduced to Great Britain in the 1870s, and there are approximately 600 of them roaming the countryside today. They have also been introduced to the United States, Argentina, and France.

Despite the fierce appearance, the water deer is typically a gentle and shy creature. Who knows what might happen, however, if it ever teams up with the Wolverine frog, werewolf mouse, and zombie ants. It could be the makings of a new team of superheroes, or it could be the beginning of a sinister plot to take over the world.