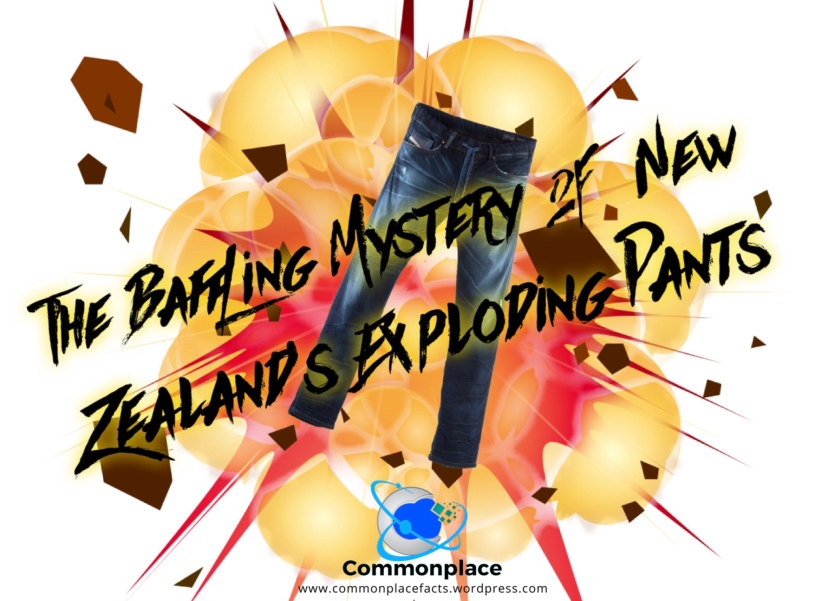 Farmers have a hard enough time of it with all the challenges they have to face. Weather, regulations, animal diseases, crop blights, and fluctuating commodities markets are only a few of the difficulties they face every day. What could possibly make the job more difficult? How about the ever-present danger that your trousers might spontaneously explode? That was exactly the problem faced by New Zealand farmers nearly a century ago.

In August 1931, farmer Richard Buckley made an astonishing claim. After a hard day of treating his fields for weeds, Buckley settled down in front of his fireplace for a quiet evening. His trousers were drying in front of the fire, and he was warming his toes, just starting to feel a little sleepy. With breathtaking suddenness, the serenity of this domestic scene was shattered when his pants exploded with a loud bang. Buckley shot up out of his chair, startled to see the remnants of his trousers on fire and threatening to send his entire house up in flames. He managed to hurl the burning britches out of the window. They hit the ground with more explosions and continued to burn until there was nothing left. The grass outside of his house was scorched, but aside from a case of shattered nerves, Buckley was unharmed.

Buckley’s report was immediately met with suspicion. Whoever heard of spontaneously-exploding trousers? Neighborhood gossip undoubtedly kept returning to the question of what the farmer had been drinking that night. More charitable speculation centered around whether he had forgotten that he had some kind of explosive in his pants pockets that perhaps got a little too close to the fire.

As word of Buckley’s misfortune started to spread, other farmers came forward with similar stories. One farmer said he was riding his horse when his pants began to smolder right there in the saddle. The wife of another farmer said she was hanging her husband’s pants on the clothesline when they suddenly burst into flames. Most of those who experienced this phenomenon managed to free themselves from their britches before experiencing serious injury, but not everyone was so fortunate. Several reports emerged of farmers who experienced severe burns from their flaming attire. A few fared even worse, such as the farmer who struck a match so he could have enough light to check on his sleeping child. His pants exploded and ignited with such force that he died.

The experts were baffled. What could possibly be causing this peculiar plague within the farming community? As it turns out, it all started with a weed known as ragwort (Jacobaea vulgaris). Ragwort looks a bit like an overgrown dandelion and is not native to New Zealand. It found its way there in the 19th century and quickly spread throughout fields and pasturelands. It is particularly problematic for farmers because it is poisonous to cows and horses.

The answer to this pesky problem seemed to present itself in 1930. Sodium chlorate worked as the perfect herbicide to combat the ragwort problem. The government encouraged farmers to liberally treat affected areas with the chemical, and the resultant reduction in ragwort was making everyone happy.

An unexpected side effect of the wide use of sodium chlorate came from the fact that a fair amount of the chemical ended up spilling or spraying on the trousers of the farmers who used it. Sodium chlorate, it turns out, tends to bind with fibers such as cotton, forming highly-volatile crystals. How volatile? It seems that just a little bit of jostling or a wee bit of extra heat can cause the crystals to ignite with explosive intensity.

Once this dilemma was solved, the government wanted to get the word out as quickly as possible. This newspaper article is one such warning. Because of this and because of the move away from raising cows and horses in favor of sheep and goats, which can eat ragwort without any problems, the exploding trousers epidemic quickly became a curious footnote to the history of 1930s New Zealand.

This strange chapter in the history of agriculture has understandably taken on an air of notoriety. The events feature in New Scientist’s collection of strange science, Farmer Buckley’s Exploding Trousers and Other Odd Events On the Way to Scientific Discovery. It also became the premise of a widely-popular episode of Mythbusters, confirming the dangerous combination of sodium chlorate and farming apparel.

See a clip of that episode of Mythbusters below.

Not to be outdone, James Watson of Massey University, New Zealand, received an Ig Nobel Prize in Agriculture in 2005 for his scholarly study, “The Significance of Mr. Richard Buckley’s Exploding Trousers: Reflections on an Aspect of Technological Change in New Zealand Dairy-Farming between the World Wars,” (Agricultural History, vol. 78, no. 3, Summer 2004, pp. 346-60.)