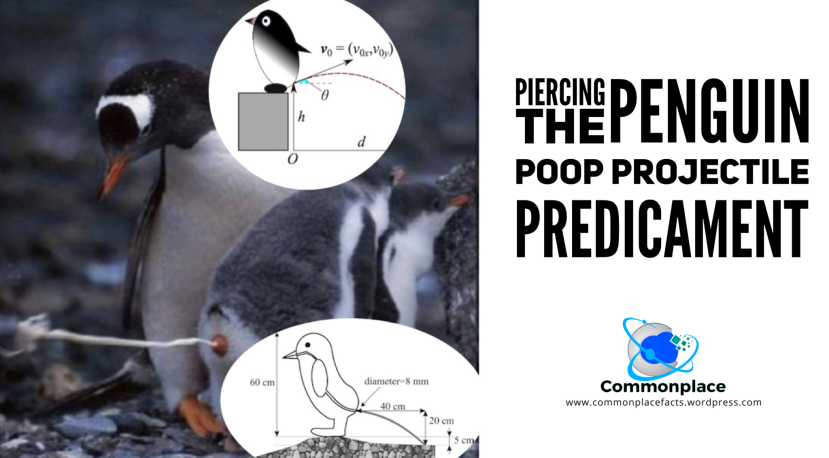 If we at Commonplace ever find ourselves at a loss for something to write about, the Ig Nobel prizes are sure to be a goldmine of inspiration. One of the 2005 laureates provides just the fodder for those whose interests include a mixture of animals, mathematics, physics, and middle school boys’ toilet humor.

The recipients of the coveted Ig Nobel Prize for 2005 were Victor Benno Meyer-Rochow of International University Bremen, Germany and the University of Oulu, Finland; and Jozsef Gal of Loránd Eötvös University, Hungary. They put their well-educated minds together to tackle the perennial question, “Just how much pressure do penguins build up in their bowels to project their poop so far?”

The researchers published their findings in a paper entitled “Pressures Produced When Penguins Pooh — Calculations on Avian Defaecation” (published in the journal Polar Biology, vol. 27, 2003, pp. 56-8). 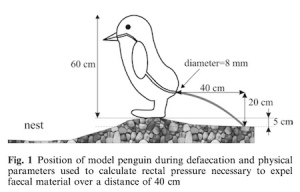 Technical drawing from the research paper.

According to the study, “[W]e calculated that fully grown penguins generate pressures of around 10 kPa (77 mm Hg) to expel watery material and 60 kPa (450 mm Hg) to expel material of higher viscosity similar to that of olive oil. The forces involved, lying well above those known for humans, are high, but do not lead to an energetically wasteful turbulent flow. Whether a bird chooses the direction into which it decides to expel its faeces, and what role the wind plays in this, remain unknown.”

Meyer-Rochow is proud of his contribution to the field of human knowledge, but he acknowledges the delicacy needed to explain his work in some settings. He recounted his opportunity to meet Queen Elizabeth II: “When asked by the Queen if it hadn’t been very cold in Antarctica and she inquired about how our work had beneﬁtted society, I replied that, of course, it had been a little cold at times. Regarding our results, they had made the ‘book of human knowledge’ just a tiny bit thicker (I am not a believer that all research must immediately be seen to be applied).”

As fascinating as this subject is, it should be of no surprise that the Meyer-Rochow and Gal study only teased the appetite of those who really want to get to the bottom of flightless bird bowel bombardment. Researchers Hiroyuki Tajima and Fumiya Fujisawa at Kochi University and the Katsurahama Aquarium, Japan, delved deeper into the muck and mire.

Diagram from the new study.

Their study, “Projectile Trajectory of Penguin’s Faeces and Rectal Pressure Revisited” (arXiv 2007.00926v1, 2020), explains the need for further research into penguin pressure from their shooting sphincters: “Practically, it is important to see how far faeceses reach when penguins expel them from higher places. Such information is useful for keepers to avoid the direct hitting of faeceses. We estimate the upper bound for the maximum flight distance by solving the Newton‘s equation of motion. Our results indicate that the safety zone should be 1.34 meters away from a penguin trying to poop in typical environments. In the presence of the viscous resistance, the grounding time and the flying distance of faeces can be expressed in terms of Lambert {\it W} function. Furthermore, we address the penguin’s rectal pressure within the hydrodynamical approximation combining Bernoulli’s theorem and Hagen-Poiseuille equation for viscosity corrections. We found that the calculated rectal pressure is larger than the estimation in the previous work.” Indeed, the study shows rectal pressure as much as 1.4 times that of the previous study. (If you are interested in the math, click on the link above and get an eyeful.)