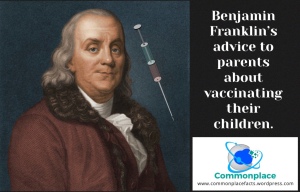 Benjamin Franklin has earned a lasting place in history as a brilliant scientist, inventor, diplomat, and philosopher. Due to tragic circumstances, he was also compelled to become one of history’s first pro-vaccination advocates.

Franklin told of the heartbreaking experience in his Autobiography:

“In 1736 I lost one of my sons, a fine boy of four years old, by the small-pox, taken in the common way. I long regretted bitterly, and still regret that I had not given it to him by inoculation. This I mention for the sake of parents who omit that operation, on the supposition that they should never forgive themselves if a child died under it; my example showing that the regret may be the same either way, and that, therefore, the safer should be chosen.”

The process for protecting against diseases was somewhat different in those days. The process involved inhaling the dried secretions of a smallpox victim or inserting some of it in a small incision of the recipient. The risks were higher than the vaccination method introduced by Edward Jenner six years after Benjamin Franklin’s death. As a result, many parents chose not to pursue inoculation for their children.

Franklin apparently was once a skeptic, as well. In 1721 the newspaper run by his brother and at which Benjamin was a writer was critical of smallpox inoculation. As the evidence of the value of the process became evident to Benjamin, however, he became an advocate, even before his son, Francis Folger Franklin, came down with the disease. The reason young Francis was not inoculated was because he was combatting other illnesses at the time, and his father did not want to tax the boy’s already weakened body with the weakened smallpox.

More than 200 years after his death, many people swear by some of Franklin’s words of advice, such as, “A penny saved is a penny earned,” and “Early to bed and early to rise makes a man healthy, wealthy, and wise.” Parents should heed his advice about vaccination, as well, or they will prove another of his maxims: “We are all born ignorant, but one must work hard to remain stupid.”

Read the Centers for Disease Control and Prevention’s report on vaccine safety and the disproven claims about the links to autism.