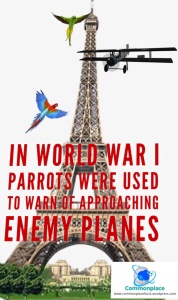 During World War I, citizens of Paris were quick to contribute to the war effort in any way possible. Parisians of all walks of left chipped in, whether poor or rich, young or old. Although their contribution does not fill many pages in the history books, even the birds lent a hand — well, a wing, anyway.

Among those enlisted to defend the city were parrots. These colorful birds were housed atop the Eiffel Tower. The parrot’s exceptional hearing made it the perfect leader of the city’s early warning system. Long before any human could detect the sound, parrots would begin squawking at the approach of incoming enemy aircraft.

The birds served valiantly, but the programmed was discontinued when the parrots were unable to learn the difference between German and Allied aircraft.