Meet the Man Who Proposed the First Mission to the Moon… in 1638!

Dr. John Wilkins was definitely a man ahead of his time. When he proposed the first manned mission to the moon, he knew he would have to wait for technology to catch up to his ideas. It’s unlikely, however, that he ever imagined the wait would be 331 years.

Wilkins (1614-1672) was one of the founders of the Royal Society of London for Improving Natural Knowledge. A learned philosopher, clergyman, and author, Wilkins clearly qualified as a polymath. Included among his ideas was a proposal for a universal language and a system of measurement similar to the metric system. When he turned his active imagination toward the heavens, he saw possibilities that would take centuries to unfold. 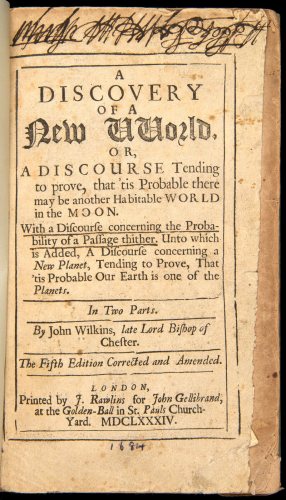 John Wilkins’ “A Discovery of a New World; or, A Discourse tending to Prove that ‘tis probable there may be another habitable World in the Moon.”

In 1638 he published Discovery of a New World; or, A Discourse tending to Prove that ‘tis probable there may be another habitable World in the Moon. He described his concept of a flying chariot with a vertical rotating sail. This vehicle could be used to break free of earth’s gravity and bring humans to the moon’s surface for exploration.

Wilkins gave considerable attention to addressing several of the obstacles astronauts would face. He wrote that since the travelers would be free from the constraints of gravity, “we shall not at all spend ourselves in any labour and consequently not much need the Reparation of Diet: But may perhaps live altogether without it.”

Written nearly half a century before Newton’s observations on gravity, Wilkins was clearly ahead of his time when he proposed that gravity’s pull could be overcome with sufficient distance from the earth’s surface. This flew in the face of many scientists who believed gravity’s pull to be uniform throughout the universe.

Wilkins’ interests in science and theology came together when he wrote, “I do seriously and upon good grounds affirm it possible to make a Flying Chariot; in which a man may sit and give such a Motion unto it as shall convey him through the air.” As a man of the cloth, it only made sense to him that God would not go to the trouble of creating a world without also populating it. His reasoning, therefore, for going to the moon went beyond mere exploration; he intended to make contact with the cultures that surely resided there.

Wilkins knew there would be those who scoffed at his ideas, but he was undeterred. He wrote, that even the inventions of ships seemed impossible to the people who first conceived them, and “none but the bold, daring men durst venture … We have no just reason to be discouraged in our hopes of the like success.”

Read about the President who believed the earth was hollow and held a secret civilization.

Read the newspaper account of the discovery of a civilization on the moon.