The Strangely-Spelled Road to the Lowest-Grossing Movie in History 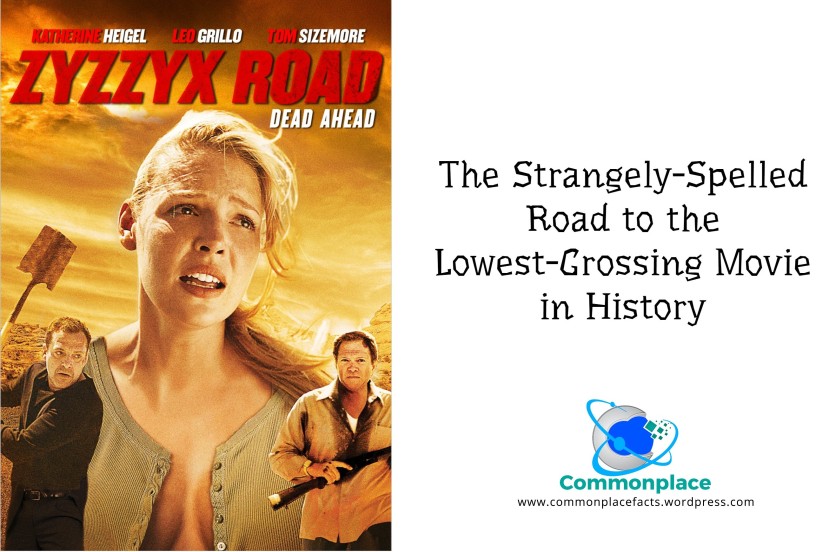 The movie Zyzzyx Road is worth noting. Please note that we did not say it is worth watching. In terms of writing, cinematography, acting, and originality, the whole thing would better be called Zzzzzzz Road. What makes this movie exceptional is that it has the dubious honor of being the lowest-grossing movie of all time. Read on to learn how this blockbuster production only managed to generate box office sales of $30. OK, we exaggerate. It actually only earned $20.

The 2006 film was written, produced, and directed by John Penney. The plot, despite having read the plot synopsis a number of times, still fails to interest us enough to hold it in memory long enough to write it here. We were far more interested in trying to find out why the plot centers around the famous Zzyzx Road, yet the movie’s name spells it “Zyzzyx.” If there is an explanation for this, it has, alas, eluded us.

Speaking of misspellings, Katherine Heigl had a starring role in the film, but you wouldn’t know that by looking at the movie poster or DVD cover, which inexplicably spells her last name “Heigel.”

Tom Sizemore also has a featured role. He generated some free publicity for Zyzzyx Road when he was arrested and charged with illegal drug use and repeatedly faking drug tests during the film’s production.

The leading role was reserved for Leo Grillo, who is also known for appearing in the heart-warming tale, Your Mommy Kills Animals. Grillo also served as the executive producer Zyzzyx Road.

Zyzzyx Road was released on February 25, 2006. After six days, it ended its theatrical run. If you missed it, you’re certainly not alone. A stunning total of six people purchased tickets to see the film in the theater, bringing in a grand total of $30 for box office revenue. Upon closer examination, the numbers are even more dismal. Two of the ticket buyers included the film’s makeup artist and one of her friends. When Grillo learned of this, he personally refunded the price of both of their tickets, thus unofficially reducing the film’s box office gross to $20.

It might help to know there was a bit of a strategy that intentionally dampened the box office results. It is, however, too much to hope that the strategy centered on being too ashamed of the final product to promote it. The producers envisioned big international sales and wanted to focus its publicity efforts on the overseas market. The Screen Actors Guild rules for low-budget films (the movie cost $1.2 million to make) required the movie to be released domestically before being sent overseas.

To fulfill the domestic release obligations, Zyzzyx Road was shown once a day, at noon, for six days at Highland Park Village Theater in Dallas, Texas. Having satisfied the domestic requirements, the producers packed up Zyzzyx Road and took it to the foreign markets, ready, at last, to start rolling in the cash that was sure to follow.

The road to financial success turned out to be just as convoluted as the plot of this ill-begotten movie. Despite being released and promoted in 23 countries, by the end of its box office run, it managed to pull in a grand total of $368,000 — a far cry from what was needed to offset the $1.2 million budget, even without counting the $10 ticket refunds.

If you wish to help the producers recoup some of the nearly $1 million that they lost on this thing, you can buy the DVD from Amazon here. The $9.98 you spend on it will seem like a giant windfall for them.