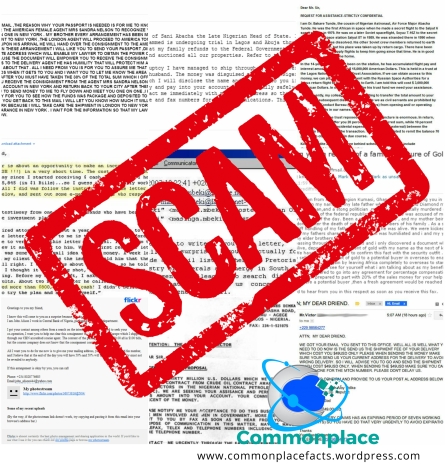 On the surface, it seems too incredible to actually be a fraud. There is the barest hint of the possibility of truth, that you find yourself thinking, “Maybe I really am a distant relative to a Nigerian prince, and this is my big chance to strike it rich.” If you start to follow that line of thinking for long, you will soon find yourself among the countless victims whose bank accounts are drained through one of Nigeria’s biggest industries: the email scam.

Known as “419 scams” because of the Nigerian statute that prohibits such activity, these schemes have been robbing naive victims for centuries. They are based on the Advance Fee Scam, and have been traced back at least as far as the late 18th century. Since the advent of the internet, however, the scheme has taken off at a viral rate.

While people from all over the world participate in these schemes, one study determined that at least 51% of all such scams invoke an alleged member of the Nigerian royal family. The scammers continually revise their strategies. One recent scheme sought money to help return a Nigerian astronaut to earth, after being stranded on a secret space station for the past decade.

If such claims seem preposterous, that’s actually intentional. Researcher Cormac Herley observed, “By sending an email that repels all but the most gullible the scammer gets the most promising marks to self-select.”

How successful are these schemes? In 2017, an estimated $12.7 billion was lost through this technique. It is such a lucrative venture for the nation that it has developed an industry of cyber cafés equipped with satellite internet service, created specifically for professional scammers. These establishments often lock their doors during USA business hours (10:00 pm to 7:00 am, local time) to allow scammers inside to work without fear of interruption or discovery.

The premise of the scam typically means that the victim intended to conspire to illegally move funds in contravention to Nigerian laws. Consequently, the government of Nigeria is not known to be sympathetic to the victims of these scams. The best protection against such fraud is to exercise some common sense. If it sounds too good to be true, it almost certainly is. The FBI gives the following tips for avoiding Nigerian Letter or “419” Fraud: