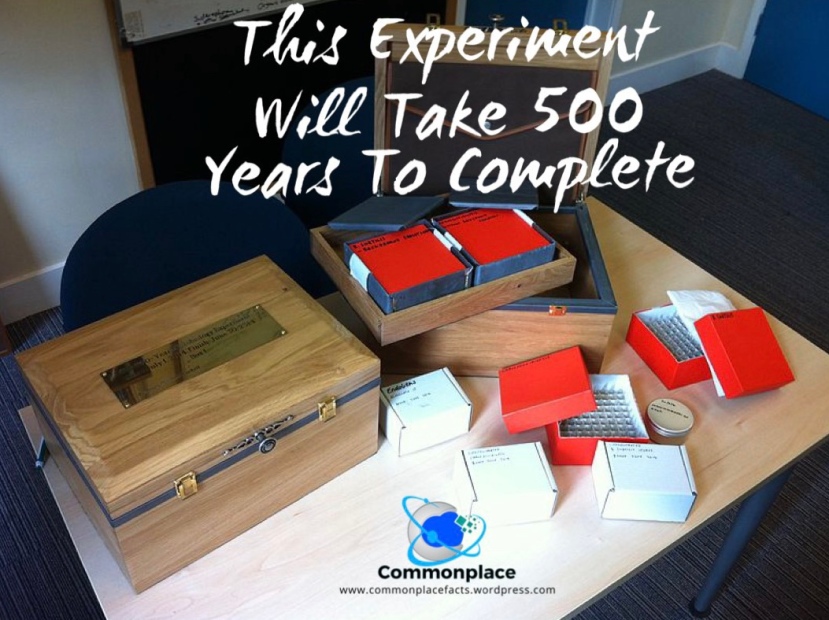 If you search through the inventory at the University of Edinburgh, you will come across a wooden box with 500 glass vials. Each of the vials is hermetically sealed. Half are shielded with lead. This curious collection is at the heart of an intriguing experiment. If you want to see how the experiment turns out, you’d better be patient. It will be 495 years from now.

Charles Cockell, a researcher at the university, was one of the scientists who dreamed up the idea of a 500-year experiment to study the longevity of bacteria. Cockell once came across a dried petri dish of Chroococcidiopsis bacteria, forgotten for 10 years. He found that the cells were still viable. Other scientists have revived bacteria from 118-year-old cans of meat and, more controversially, from amber and salt crystals millions of years old.

Cockell and his German and U.S. collaborators put samples of either Chroococcidiopsis or another bacterium, Bacillus subtilis in each of the 800 vials. A duplicate set is maintained at the Natural History Museum in London for backup. The experiment began in 2014. Every other year for the first 24 years, and then every 25 years for the next 475, scientists will check the viability of the dried bacteria. The big finish will be in 2514.

The mechanics of testing the viability is fairly elementary. The biggest challenge is the logistics of managing an experiment over half of a millennium. Instructions for the experiment were placed on a USB stick and kept with the box. Not leaving anything to chance, however, a paper copy was also generated. “But think about 500-year-old paper, how it would yellow and crumble,” said researcher Ralf Möller. “Should we carve it in stone? Do we have to carve it in a metal plate?” The team asks that researchers at each 25-year time point copy the instructions so that they remain linguistically and technologically up to date.

This is not the first long-term experiment of this nature. At a fertilizer magnate’s country estate in England, scientists have been studying how different fertilizers affect the particular crops grown in the same fields year after year since 1843. In Illinois, agricultural scientists have been carrying out a corn-breeding study since 1896. At Michigan State University, a botanist in 1879 buried 20 glass bottles of 50 seeds to be dug up at regular intervals and tested for viability. The location of the bottles is maintained in secrecy to prevent tampering. The last bottle will be dug up in 2020.

Read about the song that takes 639 years to play.

Read about the longest games on record.