The Olympic torch is one of the most recognizable and time-honored symbols in the world. Whenever it appears in a city, it is a time of rejoicing as we honor the international cooperation of athletic competition. There was one time, however, when the torch evoked laughter and ridicule. The occasion went down in history as the Olympic Torch Hoax of 1956.

In preparation for the Melbourne Olympic Games, the Olympic torch was carried in relay fashion throughout Australia. Crowds gathered at every stop along the way, and festivities were planned to mark the dignity of the occasion.

No one anticipated the arrival of the torch more than the citizens of Sydney. More than 30,000 people lined the streets, eager to catch a glimpse of cross-country champion Harry Dillon as he carried the torch into the city. Mayor Pat Hills was still putting on his mayoral vestments when word came that the torch was arriving earlier than expected. He hurried to the top of the steps of the Town Hall, leaving half of his symbols of office behind. There, he would receive the torch from Dillon and offer some brief remarks to commemorate the occasion before handing the torch off to the next runner, Bert Button.

The shouts of the crowd announced the arrival of the torch. Flanked by a police escort, the runner sprinted up the steps of the Town Hall, flaming torch in hand. He handed the blazing symbol of unity to the elected official and disappeared into the crowd. 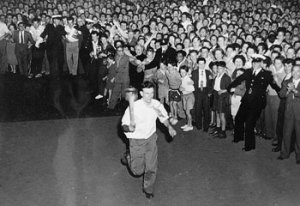 Mayor Hills accepted the torch and began speaking. That’s when the organizer of the event, Marcus Marsden, stopped him and said, “That’s not the real torch.”

The mayor looked at the item in his hand and saw for the first time that it was a table leg with an old plum pudding tin nailed on top, painted with silver paint. The paint was still wet when the mayor took hold of it. The fire in the tin was kept ablaze by three pairs of underpants, soaked in kerosene.

Only then did people begin to connect the dots and realize that the runner who handed off the torch looked nothing like what they expected. Rather than the athletic Harry Dillon, dressed in running singlet and shorts, the fellow who carried this torch was perspiring heavily and was wearing grey slacks, a white shirt, and a green tie.

Mayor Hills realized he had been pranked and told the confused spectators, “That was a trial run. Our friends from the university think things like this are funny. It was a hoax by somebody. I hope you are enjoying the joke.” He then went back into the town hall to finish getting dressed. Ten minutes later the real Olympic torch arrived, carried, as expected, by Harry Dillon.

The hoax was planned by local university students. One of them was all set to carry the torch and was dressed like the other torchbearers, in white shorts, shoes and a singlet. At the last moment, that student got cold feet, so Barry Larkin was drafted into service. With insufficient time to get properly attired, he grabbed the torch, pushed his way through the crowd, and started his run. A friend on a motorcycle accompanied him, lending to the appearance of having an official escort. By the time he reached the area of the Town Hall, Sydney police took over, offering an official police escort. After handing the torch to the mayor, Larkin hopped onto a tram to Newtown. There, he met up with his friends at a pub and toasted each other as they watched the event reported on local television.