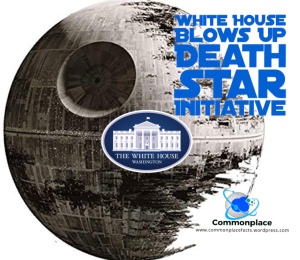 When the White House launched a website to encourage citizen participation in government, it is doubtful that many thought to protect against undue influence by the dark side of The Force. Nevertheless, the highest levels of the United States government were forced to deal with a massive outpouring of support for the construction of a Death Star.

During the administration of President Barack Obama, the White House launched a website called We the People. This site allows citizens to petition the government about any matter of concern. At the time, the website carried the promise that any petition that garnered the support of at least 25,000 signatories would receive an official response. Today, that number has been increased to 100,000, and the requisite number must be attained within thirty days.

Many people took to the internet to request support for a number of causes and to demand official responses to such weighty things as the legalization of marijuana, permitting online gambling, and answering the question of whether the government recognizes extraterrestrial life. There was one petition, in particular, that gained a surprising amount of support. Someone asked that the government devote its resources to the building of a Death Star comparable to that of Star Wars fame.

The request garnered the requisite 25,000 signatures, and the internet breathlessly awaited the response from the Executive Branch. When it came, White House science and technology adviser Paul Shawcross prefaced it by warning Star Wars fans, “This Isn’t the Petition Response You’re Looking For.”

Shawcross explained that at $850 quadrillion, the cost was simply too high in a time of tight budgets. Moreover  “the administration does not support blowing up planets.” He further justified the response, saying, “Why would we spend countless taxpayer dollars on a Death Star with a fundamental flaw that can be exploited by a one-man starship?”

Shawcross tried to reassure the disappointed petitioners that the various space projects the White House has launched are at least as cool as a Death Star. Perhaps this would have been slightly more reassuring if Shawcross had followed the example of a member of the Welsh government who answered a question about UFOs in a press release written in Klingon.