Scramble for a Top Scrabble Score 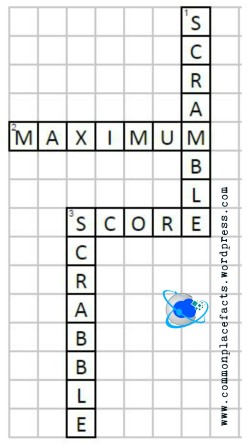 Why would you need to know about oxyphenbutazone? If you have an interest in medicine, you need to know it as a non-steroidal anti-inflammatory drug. If you are a Scrabble player, however, you definitely want to store it away in your memory because it can bring you more points than any other word.

Playing under American rules, oxyphenbutazone  can earn  you 1,780 points across three triple-word-score squares, joining seven tiles to eight already-played tiles. Of course, that can only happen under extremely rare conditions, such as those depicted below. 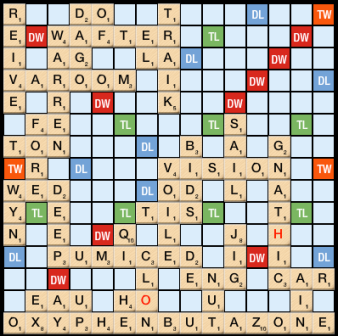 If you are looking to maximize your points in your opening move, you have a few more options. Under the Official Scrabble Players Dictionary, the definitive Scrabble dictionary for players in the United States and Canada, muzjiks will garner you 128 points. If you play in the United Kingdom, Official Scrabble Words identifies quartzy and squeezy as top opening words, earning you 126 points for either of them.

If you are already beyond your opening move and you have the chance to play a word over two triple-score squares and with a premium-scoring tile on the double-score square, you have five opportunities to play a word that will earn you 392 points in a single move. Those words are oxazepam, beziques, caziques, mezquits, and mezquite.