Do You Think You Know the Tallest Mountain? You Are Probably Wrong 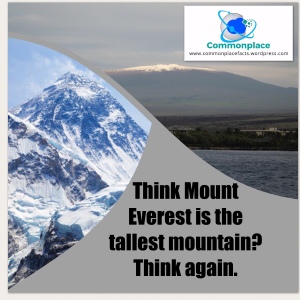 When asked to identify the tallest mountain on the planet, most people readily name Mount Everest. Most people are wrong. The holder of that particular honor is actually Mauna Kea, the tallest point on the island of Hawaii. Why do we think it is Mount Everest? The answer lies in terminology.

When discussing how “tall” a mountain is, the measurement is from the base of the mountain to its peak. The inactive Hawaiian volcano is a modest 13,799 feet above sea level, but when measured from the seabed to its summit, it is 33,465 feet high—about three-quarters of a mile taller than Mount Everest.

There is still hope that Everest can win both titles since it is still growing. At its current rate of growth — a quarter of an inch per year — it is going to take a while to catch up.