The Search to Uncover the Legendary Secret Graveyard of Video Games 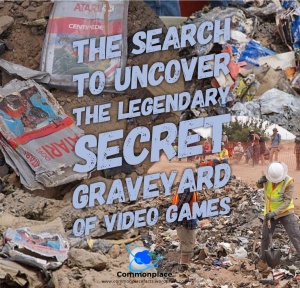 It was April 2014, and the excavators approached the rumored burial site with high hopes. Many expressed doubt that the place even existed. Those who were in the best position to know had publicly stated that the site was an urban legend. Despite the naysayers, there was a loyal group of true believers who were confident they could find the fabled burial site and prove that the legends were true. As the shovelfuls of dirt began to disclose the buried secrets, the long-sought evidence finally came to light. What mysterious treasures did they seek? Bones? Gold? Long-abandoned structures? Would you believe the focus of their exhaustive exploration was video games?

The path to the fabled burial site of video games begins over 40 years earlier. Beginning with the Magnavox Odyssey in 1972, console video games gained steadily in popularity and reached fever pitch by 1983. Atari established itself early on as the leader in the market when it released Pong, the first comercially-successful video game. It was the Atari 2600, released in 1977, that made home video game consoles readily available to consumers, selling 400,000 units in the first year alone.

When the movie E.T. the Extra-Terrestrial hit the theaters in 1982 and quickly became an international blockbuster, Atari was quick to capitalize on its success. In late July of that year, Atari purchased the exclusive rights to develop a game based upon the film, and then fast-tracked it into production. Hoping to release the game in time for the Christmas shopping season, developers were tasked with coming up with the finished product in five and a half weeks. The result of their efforts would go down in history. Unfortunately, it was historic for all of the wrong reasons. 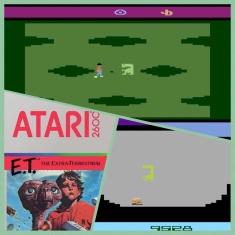 E.T. quickly gained distinction as one of the worst video games of all time. Its simplistic graphics and unchallenging objectives angered those who stood in line to purchase the earliest copies. (Try playing the game here and see for yourself.) As word got out about the game’s failings, sales not only tanked, but stores saw unprecedented returns from unsatisfied customers.

Atari was taken completely by surprise. It anticipated sales consistent with the viewship of the movie. Consequently, the company produced approximately 4 million game cartridges, fully expecting to sell all of them. In reality, about 3.5 million of them were either unsold or returned to the company.

The months that followed were nothing short of devastating to Atari. It went from posting a $2 billion profit in 1982 to a $562 million loss in 1983. With consumer confidence in the brand shot, and with the saturation of the video game market, what was once a sure-fire money maker reversed course and turned into the great Video Game Crash of 1983.

It was in September of 1983 that the Alamogordo Daily News of Alamogordo, New Mexico, began to report on rumors of a secret video game burial site. The newspaper reported that video game cartridges had been shipped out of Atari warehouses in mass numbers. Anywhere from ten to twenty semi-truckloads were rumored to have been moved from El Paso, Texas to an undisclosed, unmarked landfill. The contents of these shipments were supposedly crushed before being covered in dirt. The newspaper reported the speculation that this was done under the cloak of secrecy to prevent the curious from uncovering a veritable treasure trove of video games. Atari officials denied the existence of the burial site and attributed the reports to urban legends.

Despite the repeated denials, the rumors persisted. Finally, in 2013, researchers doggedly traced the rumors to a location in Alamogordo, New Mexico. They applied to the Alamogordo City Commission for permission to excavate the area. On May 28, 2013, Commission gave approval for six months of access to the site for the purpose of creating a documentary about the legend and to conduct excavations. On April 26, 2014, the many years of sleuthing paid off.

Workers uncover a portion of the hundreds of thousands of video games secretly buried in New Mexico.

Only after the evidence was uncovered did former Atari manager James Heller admit that 728,000 cartridges of various video games were buried at the site, as well as many unsold game consoles and controls. One of the recovered cartridges — a copy of E.T. the Extra-Terresstrial — was received and put on display at the Smithsonian Institution. In 2015, the Henry Ford Museum added several excavated cartridges and a video touchpad, a sample of landfill dirt taken from the site of the burial, and items of clothing worn by the excavation team to their collection. These museum displays memorialize the successful endeavors of those who doggedly pursued the remains and legacy of the worst video game ever.