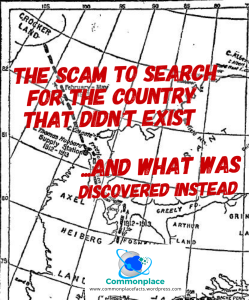 Bob was a con man. That’s not how he would have described himself. He would have told you that he was a visionary and hero — someone who sought out new frontiers to make life better for everyone. But that’s what you would expect a con man to say, isn’t it. The fact is that Bob needed money, and he knew no bank would lend to the likes of him. He also knew he couldn’t get money through any conventional means. The only option for him was to find a mark — someone who would fall for a “too-good-to-be-true” scheme. For what he had in mind, he couldn’t settle for something as small as selling the Eiffel Tower or scamming people into buying the Taj Mahal. He was going to have to sell an undiscovered country.

After much consideration, Bob settled on his mark. George Crocker had plenty of money, and Bob was pretty sure he could get Crocker to part with some of that lucre if he could appeal to the man’s vanity. The wealthy financier had many opportunities to have buildings named after him, so Bob needed to offer him a chance of a lifetime.

Bob approached Crocker and told him a fabulous story about an expedition through the waters north of Canada, where he had seen “the faint white summits” of previously undiscovered land 130 miles northwest of Cape Thomas Hubbard. 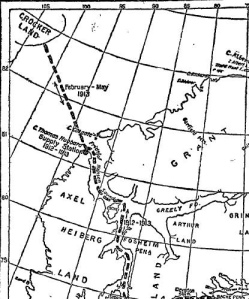 Bob showed Crocker a map with the location of the newly-discovered landmass. There, at latitude 83 degrees N, longitude 100 degrees W, was the mysterious landmass, heretofore untouched by humans. He labeled the discovery “Crocker Land.” Bob told Crocker that he would personally lead a group of daring explorers to Crocker Land and guarantee that geography classes would teach schoolchildren the Crocker name for the rest of time. All it would cost for this was a mere $50,000.

As you may have guessed, there was no Crocker Land. It also turned out there was no funding — at least from George Crocker. Crocker was quite interested in the concept, and by all accounts, he was just about ready to give the money to Bob when something else came up that dominated his attention: the 1906 San Francisco earthquake.

Crocker devoted his money and his attention to rebuilding San Francisco after the tragic disaster. Bob had to set his sights on another mark if he was going to get his money. It did not take him long to find a group of people who were very interested in geography: the National Geographic Society.

With the needed money in hand, Bob set out on his expedition — but not to explore Crocker Land. Crocker Land was, of course, a crock. He had another objective in mind that led him to try to con one of the wealthiest men in America. On April 6, 1909, he achieved his objective. He wrote in his journal, “The Pole at last!!! The prize of 3 centuries, my dream and ambition for 23 years. Mine at last.”

“Bob” was Robert Peary. One of the most famous explorers of the late 19th and early 20th centuries, he had already made a name for himself with his five expeditions to the Arctic Circle. Despite this, his ultimate dream eluded him: to be the first person to set foot on the North Pole. That dream, it appeared, had been achieved with the assistance of the funding from the National Geographic Society. No sooner had he announced his great achievement, however, than it all got called into question.

One of Peary’s crew members on an earlier expedition, Federick Cook, claimed that he, not Peary, made it to the North Pole first. He said he made the journey a full year ahead of Peary. In the end, Crocker Land would be a central issue in deciding the controversy. Peary’s claims about finding this once-undiscovered country were not limited to conversations with George Crocker. He also put them in print.

In his 1907 book, Nearest the Pole, Peary told of his 1906 expedition that brought him close to the North Pole. Curiously, the original manuscript and subsequent revisions made no mention of Crocker Land. It was only at the last moment, just before the book went to press — and right at the time that he was pressing Crocker to give him the money — that Peary hastily added references to the “the faint white summits” he had spotted in his journeys. It is also noteworthy that  Peary’s notes from his 1905-06 expedition are silent about Crocker Land. On the day he said he first laid eyes on the mysterious land, his notes record only that he went hunting, climbed some hills, and took a good look around. No crew members recall him ever saying anything about seeing a previously-unknown landmass, either.

Frederick Cook read Nearest the Pole and remarked about how odd it was that his own travels to the North Pole took him right through that area, and he didn’t see a single bit of land. Could it be, he wondered aloud, that Peary was making the whole thing up? If he was making things up about Crocker Land, could he also be fabricating his claim that he made it to the North Pole?

Peary and his supporters doubled down, insisting there was a Crocker Land and that Cook’s failure to spot it only proved that Cook was the one who was making things up. If he had really gone to the Pole as he claimed, there’s no way he could have missed the large landmass.

Donald MacMillan, one of Peary’s assistants on the 1909 trip, announced that he would lead an expedition to prove the existence of Crocker Land, vindicating Peary and forever proving that Cook was a crook. Excitement grew about the prospect. With both the South Pole and the North Pole having been reached, it appeared that Crocker Land was the last untouched place on earth. The quest to be the first to set foot on it took on heroic proportions.

After receiving backing from the American Museum of Natural History, the University of Illinois, and the American Geographical Society, the MacMillan expedition set out in July 1913. They took equipment to make motion picture evidence of their discovery, as well as wireless equipment to allow them to make the first radio broadcast from Crocker Land.

Alas, MacMillan met with misfortune from the start. He had the bad judgment to hire a habitually drunk man as the captain. As a result, MacMillan’s ship, the Diana, was shipwrecked before getting to Greenland. MacMillan managed to secure a substitute vessel, the Erik. By this time, however, the arctic waters were entering into the winter freeze, and the weather was against him at every step of the way.

After months of searching, the team returned home, heavily discouraged. MacMillian later wrote, “You can imagine how earnestly we scanned every foot of that horizon—not a thing in sight.”

“As we drank our hot tea and gnawed the pemmican, we did a good deal of thinking,” MacMillan wrote. “Could Peary with all his experience have been mistaken? … If he did see Crocker Land, then it was considerably more than 120 miles away, for we were now at least 100 miles from shore, with nothing in sight.”

MacMillan returned home, although it took nearly four years. During that time the crew was trapped by bad weather and iced-in waterways. The hair-raising experience involving intrigue, desperation, and murder is grippingly told in MacMillan’s book, Four Years in the White North.

When MacMillan’s news about not having found Crocker Land reached the United States, Peary defended himself to the press by noting how difficult spotting land in the Arctic could be. He said, “Seen from a distance … an iceberg with earth and stones may be taken for a rock, a cliff-walled valley filled with fog for a fjord, and the dense low clouds above a patch of open water for land.” Despite this, Peary insisted that Crocker Land definitely existed where he said he had discovered it.

Multiple attempts to prove or disprove Peary’s claims were met with mixed results. It wasn’t until 1938 that the controversy was settled once and for all. Pilot Isaac Schlossbach flew over the alleged location of Crocker Land and was able to clearly see nothing but water. Unless Crocker Land had pulled an Atlantis-level disappearing act, it appears that Robert Peary was, at best, mistaken.

George Crocker did not live to learn the fate of the fabled land bearing his name. He died of stomach cancer in December of 1909. As for Peary, his discovery of Crocker Land has been disproven, and even his claim about being the first to reach the North Pole is not without controversy. Despite Frederick Cook’s claim to have reached the Pole a year earlier, a committee of the National Geographic Society, as well as the Naval Affairs Subcommittee of the U.S. House of Representatives, officially credited Peary with that achievement. In 1988, however, polar explorer Wally Herbert conducted a reassessment of Peary’s discoveries, based upon the 1908-1909 notes of the expedition and found it “lacking in essential data.”

The final verdict of history remains as elusive as the fabled mountains of Crocker Land.