Before Rosa Parks, There Was Claudette Colvin 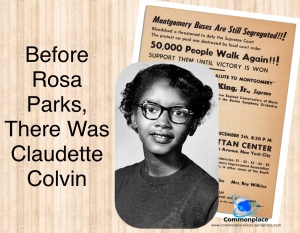 It was 1955 in Montgomery, Alabama. The young African-American woman was seated on a segregated bus, when she was told to give up her seat for a white passenger. She refused and was promptly arrested.

If this story sounds familiar to you, and you think you are reading about Rosa Parks, think again. This incident occurred on March 2, 1955 — nine months before Rosa Parks’ civil disobedience sparked one of the most important civil rights movements in American history. The person at the center of this event was Claudette Colvin.

There were reasons Colvin was not chosen as the face of the Montgomery Bus Boycott. For one thing, despite the courage she showed by retaining her seat in the face of such personal risk, she was quite young. At the time of her arrest, she was a mere 15 years old. Another factor against her was that she was unmarried and pregnant at the time. The NAACP was concerned that these factors would distract the public from the injustice of segregation. As a result, Colvin’s heroism was largely overlooked.

She is on record, however, as one of the five plaintiffs in the case Browder v Gayle that was filed to challenge bus segregation in the city. That case ended with the ruling that state and local bus segregation laws were unconstitutional. Colvin was the last witness to testify in the hearing. The case went all the way to the U.S. Supreme Court, which upheld the lower courts’ decisions that ordered the end of bus segregation in Alabama.

Learn about the man who sued the devil for violating his civil rights.